St. Lucie Commissioner Linda Bartz Shows She is a Hypocrite

St. Lucie Commissioner Linda Bartz was one of four votes for a mask mandate. She was concerned she didn’t even show up to the dais. She sat in a room by herself with a mask on to show us all how serious she thought this was.

It is quite odd that Commissioner Linda Bartz is lecturing people about health and how to breathe as she smokes cigarettes. She knowingly breathes a cancer-causing toxin by her own choice but has the audacity to try to be the nanny from hell. Linda Bartz thinks voters are smart enough to elect her but not smart enough to decide their own health decisions.

While at a local club Linda Bartz was caught in a selfie not wearing a mask while she wasn’t social distancing. She was also seen at local ribbon cuttings smoking out the side of her mask. 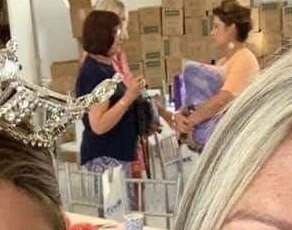 Just how does someone who won’t go to the dais, sit in a room alone while wearing a mask, and smoke cigarettes order everyone in the county to wear a mask. And then not wear one while not social distancing.

Linda Bartz did take heat for being caught. She said she owned it.

So here are the facts and I’m owning it: Last month, I attended a breakfast at the Fort Pierce Women’s Club. I wore my mask upon entering the room, while talking to people and moving about the room and only removed it when I sat down to eat. After we had finished eating, I stood up and before I could put my mask back on, was approached by a resident who needed to speak with me. I got caught up in the conversation and forgot to put my mask back on right away. However, I did put my mask back on and finished the breakfast and left.

Yes, I voted for St. Lucie County residents to wear their masks. Yes, I cared about our citizens enough to vote yes. And yes, I wanted to help “flatten the curve” and bring the number of COVID-19 cases in St. Lucie County down. I wear my mask, just as I expect others too. I do not consider my self above everyone else. It’s very easy to armchair quarterback on a position you’ve never held and to judge those in the political office you’re seeking. But look at our numbers now, they are coming down. And I appreciate everything that the residents in St. Lucie County are doing to help bring those numbers down.

Really no need to bring up the women’s club here at all. She says it was a short conversation so no big deal. She forgot how deadly she believes COVID to be. It merits everyone in the county being forced to wear a mask but she just forgot and endangered the lives of club members? She doesn’t mention that there were two people with her in the photo.

She cares enough about the citizens to vote yes and mandate it but not enough to wear it at a resident who needed to speak to her and other club members?

Does Linda Bartz think COVID is serious or not? Will she volunteer to pay the penalty and own it?

Rather than actually own her mistake. Lowlife Linda Bartz uses the Fort Pierce Women’s Club to shield her blame.

One more thing that really bothers me. I feel so bad that the Fort Pierce Women’s Club has been drug in to a negative post. This fantastic organization has done nothing but help this community, feed the hungry and provide support whenever and wherever needed. They don’t deserve that. Please visit their website to learn more about this wonderful organization.

Linda Bartz was the scandal. Little mention was ever made of the Fort Pierce Women’s Club. Without being a club member you would probably not know it was taken at the club. Yet she keeps bringing them up to deflect her actions.

Not only was Commissioner Bartz called out for her hypocrisy but also for her failed work.

Fabricating reality to try to improve the outlook of your poor judgement on a political decision about masks is very sad of a County Commissioner. This might be why your opponent refers to you as an elitist.

A mask mandate didn’t make the new cases go down. Indian River County did not pass a mask mandate, and their new cases are going down along with most counties with and without mask mandates. 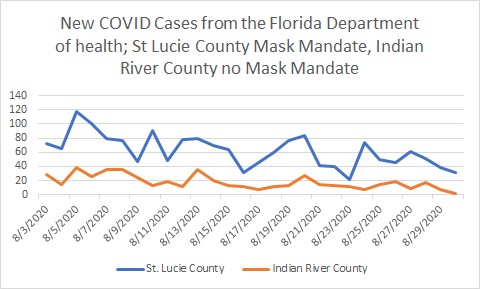 Linda has shown a history of making poor decisions. Most notably mandating winners and losers by using taxpayer money to subsidize businesses of her choosing. Business owner’s haven’t been on a level playing field under Linda Bartz. Now they’re being limited by her mask mandate while she doesn’t bother to wear one while not social distancing.

You have Successfully Subscribed!

You have Successfully Subscribed!